People first arrived in America from Eurasia a minimum of 12,000 years ago and became what we nowadays call the Native Americans. The first European to land in North America nearly 500 years before Christopher Columbus, was to be the Norse explorer Leif Ericson (970–1020). According to the Sagas of Icelanders, he established a Norse settlement at Vinland, tentatively identified with the Norse L’Anse aux Meadows on the northern tip of Newfoundland in modern-day Canada. In the 1400s Europeans re-discovered America and began exploring South America and islands off its coast. Spaniards were the first to settle in the new land, later arrived the English, Dutch, French and Swedish. With the colonization of the East Coast by the British and Dutch around 1600 began the process of European missionary work on the New Continent in matters of politics, economy, culture, and most of all, spoken and written language. In the same way as the Germanic invaders/settlers brought centuries ago the Anglo-Frisian dialects to Britain, from which the West Germanic languages including English originate, the new European settlers were to establish English speaking communities first on the East Coast and later all around the American continent. Beginning with the late 17th century we witness the evolvement of Modern English, which we speak down to the present day. 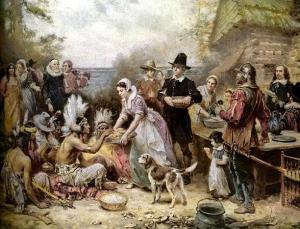 Along with these permanent migration movements, that become more and more outspread and hastened in the early 21st century with the seize of new economic areas by the profit-oriented entrepreneurs and business people, Europeans seem to be unpleasantly surprised by the latest eco-political developments in the USA. The resource-conserving European economy and environment protective culture is interfering with the war-driven US-economy, uncoupling a clash of interests. Hence, the European mercantile tradition has got to unchain its historical paradigms and enable a transatlantic free-trade area for all its like-minded trading partners in the USA. Cultural exchange and fair trade can only work in a smooth way if both continents and countries overcome the colonialist prejudices and embark upon a common future vision and interaction based on the most important of all tools of communication – language.

Since few people have the time to learn more than one or two foreign languages, we need a single lingua franca that everybody can use with everybody else. The choice has fallen on English not because it is more beautiful or more expressive, but just because it is already more widespread than any other language.

As the lingua franca in the world today, English can serve as a Euro-American mental space and air bridge for the purpose of improving the relations between these two continents of the world. With over 2 billion speakers of English as both a native language (ENL) and a foreign language (EFL) worldwide, we face the beginning of a new cultural awareness which emphasizes that English is dominating all areas of

Regarding the education system, English is still the main second language (EFL) taught and learned at compulsory school level in big parts of Europe. Among the approx. 280 million speakers of it, English (ENL & EFL) is particularly in Western and Northern Europe an important interlanguage and working language. There are about 65 million native speakers of English living in Europe today. At least since the Bologna Process, long-term effects are visible in both primal/compulsory and higher education all around Europe. The pragmatic rejig and contraction of the education system brings along a reduction in quality and a production of one-track specialists, uninterested in what goes around them. Especially information technology and economy seem to be the new booming branches in both European and American societies, whose citizens depart more and more from the concept of a classical all-round education. The long-term effect of this regression is going to be a radical split-up of society into a vast number of interest groups controlled and moneypulated by corporate America and transnational companies on both sides of the Atlantic Ocean.

We can thank both sides of the Atlantic for outstanding contributions to English-speaking cinema and literature. Throughout time, Europe has come to regard cinema and literature as art forms, even to this day. If you surf the internet in Europe, they are both usually listed under art & culture, in America they are listed under entertainment. Filmmakers, like Len Lye, Buster Keaton, Charles Chaplin, Maya Deren, Fritz Lang, Alfred Hitchcock, Peter Greenaway, Ken Loach, Mike Leigh, David Lynch, Jim Jarmusch,  Michael Winterbottom, Danny Boyle, Terry Gilliam, Stanley Kubrick, Kenneth Branagh, Guy Ritchie or Darren Aronofsky created authentic and unique movies, which carry on the cultural heritage of the English-speaking community both in Europe and the USA. Europeans continue to push cinema forward as an art form. On the other side of the Atlantic it is equally important to remember that cinema is an art form and must keep its creative autonomy and freedom of expression at all times. The English-speaking literature acquired special renown through the highest number of Nobel Prize winners (25) from all different parts of the English-speaking world: Rudyard Kipling, William Butler Yeats, George Bernhard Shaw, Sinclair Lewis, Eugene O’Neill, Pearl S. Buck, T. S. Eliot, William Faulkner, Ernest Hemingway, John Steinbeck, Samuel Beckett, Toni Morrison, to name but a few. They all contributed to the preservation of the anglophone spoken and written language and made English the most accessible tongue for the enthusiasts of literature worldwide.

In the near future, English will probably advance more and more to the main world language with Europe and the USA interacting on a global level throughout all areas of life. The internet culture is going to extend this evolution and establish English as the primary working and communication language, enlarging the English-speaking community all around the world. It remains to be seen whether this precious cultural heritage will still be connected so intensively to its mother countries in the future, or rather be detached from them by immigration, mass media and virtual interconnectivity.

Jonas Mekas (LIT/USA): As I Was Moving Ahead, Occasionally I Saw Brief Glimpses of Beauty, 2000, USA

Mircea Eliade: The Sacred and the Profane: The Nature of Religion, Harcourt Brace Jovanovich, San Diego, 1987

European Versus American Storytelling: The Case of The Third Man, P:O.V. No.12 – Comparing American and European Cinema, January 3rd, 2010

Please: No More Gutted US Remakes of European Films!, THE GUARDIAN, February 23rd, 2010

« A Poet’s Progress: Jaipur and Varanasi, April 2011
Tools of Transformation #16: Discovering the I Ching »