Spiritual Teachers of the Opposite Sex

Posted by Kimberly Nichols ⋅ February 15, 2014 ⋅ Leave a comment
Filed Under  Brian Griffith, newtopia magazine, spiritual teachers of the opposite sex

In longstanding Daoist tradition it was necessary, or at least helpful, for spiritual teachers and students to be of the opposite sex. So we commonly find female masters guiding men, and male masters teaching women. Some legends say the Yellow Emperor sought wisdom from “the Dark Lady” on Tai Mountain. Then Emperor Yu took instruction on coping with floods from “The Lady of Flowers and Clouds.”

In better recorded times, the Daoist master Yang Xi (300s CE) claimed to receive his Shangqing (Highest Clarity) teachings in visions from Lady Wei Huacun, who was the “Primordial Goddess of the Southern Ultimate” (Chan). Wang Wenqing, founder of the Five Thunders sect of Daoism (1100s CE) was guided to his Thunder Texts by an old lady who appeared in a mountainside hut, saying “I have no surname.” In Tang times, the Daoist seeker Li Quan found a scroll called The Yellow Emperor’s Classic of Using Yin Fire on Mount Shaoshi. He copied and studied it, but couldn’t understand it till an old woman appeared and gave him special grains of rice. In one of the more touching tales, a widower man named Hanzi followed his dog into a cave, and emerged into another world. There, he found his deceased wife cleaning fish in the immortals’ kitchen. She gave him instructions over several visits, by which he gained the Way. In these and many other stories, a relation with a wise woman was essential for a man’s spiritual success. 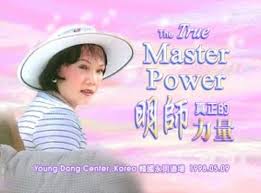 Such master-disciple relationships could be highly amorous. Yang Xi’s visions of Wei Huacun were clearly erotic, despite Yang’s emphasis on outward chastity. Besides, the whole shamanic tradition of contacting deities involved ecstatic communion of spirits. As Henri Maspero put it, “It was the beauty of the sorceress which attracted the god and made him choose her” (Maspero, a). The term lingbao, for spirit possession, is a compound of words for “treasure” and “sacred spirit.” Ling is a masculine term, and bao is feminine. It’s a word of sexual connotation (Robinet). Likewise in Tibet, deities are often pictured with consorts, as yab yum combinations symbolizing the creative union of opposites.

The popular poetry of Tang times (618–906 CE) gives numerous accounts of love affairs between transcendent teachers and disciples. In one poem, a man named Dongfang Shuo follows a strange woman known as Refined Master Jiao to her hut on a mountainside. There, she reveals herself as an intoxicating beauty, glorious as Dante’s Beatrice. Dong vows to inscribe her teachings on his bones if she will instruct him. The ancient Master Redpine (Chisongzi) was pursued by the Red Emperor’s daughter. She joined him, learned his spiritual secrets, gained immortality with him, and the two flew away to heaven. 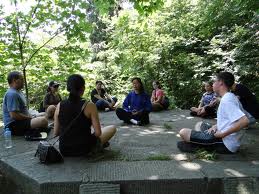 Contrary to patriarchal conventions, the holy women in these tales are often portrayed choosing male students, initiating relationships, and leading spiritual lineages (Bokenkamp). So a Tang dynasty Daoist master calling herself “a woman of Mount Sung,” described a proposal of spiritual marriage:

“I was originally registered at the Realm of Supreme Clarity;
Dwelling in exile, I wandered the five marchmounts.
Taking you, milord, as not bound by the common,
I come here to urge you to divine transcendents’ studies.

Even Ko Hung had a wife!
The Queen Mother also had a husband!
Divine transcendents all have numinous mates!
What would you think of getting together, milord?” (Cahill, a)

In China, probably most people felt that spirituality and sexuality were quite compatible, and even mutually reinforcing. The spiritual quest was a kind of natural passion. As Suzanne Cahill explains, “Divine passion is the desire of deities and humans for mutual union and communication.” Male devotees “united their two greatest longings in worship of the goddess: the wish to transcend death and the desire for perfect love” (Cahill, b). In the Scripture of the Mysterious Perfected, Daoist students were instructed to practice visualizing the Jade Maiden of Highest Mystery. They pictured her wearing a purple cap with a cloak and skirt of vermillion brocade. Through practice in visualization her image grew stronger, till her physical presence could be felt. Next, the students pictured the Jade Maiden opening her mouth to emit a brilliant red spiritual light. They opened their mouths to absorb this energy. In the most advanced practice, they visualized the goddess pressing her mouth to theirs, letting her energy fill their hearts (Kohn). As for female seekers, there’s a whole literature on women’s relations with gods, and on sex as a spiritual practice for women.

Of course the quest for an ultimate union of sex and spirit could turn into ribald comedy, especially in the hands of fun-loving peasants. So the drunken Daoist immortal Lü Dongbin reportedly sought his ultimate union with prostitutes, seducing the courtesan Bai Mudan. Next, he made a ludicrous pass at the goddess Guanyin. Concerning religious women, He Longxiang rightly observed, “There are those who go on pilgrimages, enter temples, and throw themselves in a disorderly manner at Buddhist and Daoist monks; others again plant the seed of passion into male teachers of good schools. And, of course, there are those who merely use the Dao to collect riches” (Valussi). But in most religious folklore, the male and female seekers showed more reverence than lust for their opposite-sex teachers. Male students commonly called their teachers “mother,” or even “amah” (wet nurse), while female adepts might address male teachers as “milord.” Such expressions conveyed both loving intimacy and highest respect for a guide (Cahill, 1993, c).

These teacher-student relationships were often quite intimate, like Indian guru-devotee relationships. It was not like joining an organization and following whatever leader the institution appointed. The masters often represented “teaching lineages,” which transmitted specific bodies of knowledge to a handful of students in each generation. And for such “mind to mind” transmissions, the masters and pupils had to choose each other personally. Of course many, or even most, master-pupil relationships were strictly non-erotic, as the term “mother” suggests. And probably most disciples of goddesses or wise women have always been women, learning from other women. Probably the main point is that men and women commonly thought they had much to learn from each other. As the male Daoist teacher Cao Heng explained (in 1631),

“As for the practice of the ‘other,’ it is to borrow what the ‘other’ possesses to refine what ‘I’ does not have. It is the key to perfecting Dao, and the wondrous secret for the ultimate transformation. It is not to be confused with what the world calls the deviant ways of the bedchamber arts. All the immortals and buddhas who ascended to Heaven have done so without exception by these means.” (Xun)

Of course many “teachers” in shamanic religion are said to be disembodied spirits, channelled by “sensitive” souls. Probably most leaders of “popular religion” have believed themselves channels for spirit guides. Most Daoist scriptures have been “spirit writing,” taken down as dictated from beyond. And the spirits so channeled commonly fit the pattern of opposite-sex teachers. So it was with Yang Xi’s Shangqing scriptures. Qu Yuan (ca. 300 BCE) also claimed that his Songs of Chu came from a female shaman spirit. She told him of her journeys to the Princess of the East, the goddess of the sun, the directors of destiny, or the goddesses of the Xiang River (Maspero, b). Spirit writing was always a big part of Chinese religion. We even have goddesses of spirit writing, whose tales are combinations of comedy and tragedy, such as Qi Gu and Zi Gu. These are “toilet goddesses.” They were women killed in nasty love triangles, and their bodies dumped in outhouses. Thereafter, they appeared to people in the toilet, giving them deep thoughts. Where else do people get all their good ideas? 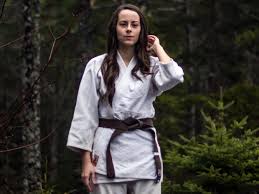 Bokenkamp, 1996, “Declarations of the Perfected,” and “The Purification Ritual of the Luminous Perfected.” In Donald S. Lopez, Jr., editor. Religions of China in Practice. Princeton, NJ: Princeton University Press, p. 169.

Brian Griffith is an independent historian who’s interested in culture wars and cultural creativity. So far he’s written four books. The Gardens of Their Dreams: Desertification and Culture in World History examines how environmental degradation has affected society across the center of the Old World from ancient times forward. Correcting Jesus: 2000 Years of Changing the Story and Different Visions of Love: Partnership and Dominator Cultures in Christian History reflect on the culture wars that have raged within Christianity from the religion’s beginning down to the present. A Galaxy of Immortal Women: The Yin Side of Chinese Civilization explores the alternative traditions and religions of Chinese women, which offer the world a powerful vision for partnership, health, and spirituality. He lives in a multicultural marriage in the multicultural hub of Toronto, and publishes with the Exterminating Angel Press.

« A Poet’s Progress: More Stories from Hong Kong
Tools of Transformation #25: The Complexities of Being Human – Identity and Identification »